How far south can aronia be grown?


Aronia cultivars, such as Viking and Nero, can also be grown in areas other than the native ranges of their parents.  Where they can be grown also depends on their cold hardiness and chilling requirements.   Freezing temperatures are a major factor limiting the geographical locations suitable for growing aronia and periodically account for significant losses in plant productivity.


During the summer, deciduous plants develop leaf buds and fruiting buds that will grow the next year.  Most perennials plants that are native to the northern temperate zone undergo a yearly period of leaf buds and flower bud dormancy.  This is an adaptive response to survive unfavorable winter conditions.  Most northern deciduous trees, shrubs, and vines, as well as bulbs and other perennial plants are dormant during the winter.

Dormancy in deciduous woody plants protects them from cold damage during the winter.  Changes in the physical and chemical processes that cause most northern deciduous plants to go dormant are triggered by longer nights and colder temperatures in late summer and fall.

Many plants increase in freezing tolerance upon exposure to low nonfreezing temperatures, a phenomenon known as cold acclimation. Research has shown that cold acclimation includes the expression of certain cold-induced genes that function to stabilize membranes against freeze-induced injury.  This is one of the basic mechanisms that plants have evolved to survive freezing temperatures.


The other environmental signal which triggers the onset of dormancy is daylength or photoperiodism.  Photoperiodism is the reaction of the plant to the length of day or night.  For most temperate woody plants, long days (short days) promote vegetative growth and short days (long nights) trigger dormancy.

As days get shorter and cold weather sets in, deciduous plants drop their leaves and begin to go dormant.  At the same time, other physiological changes occur in bark and buds to protect the plants from the oncoming winter cold.  These are natural adaptations that plants have developed that allows them to survive in a cold climate.

The physical and chemical processes involved in achieving and leaving dormancy are complex.  Plants gradually go into dormancy over a period of several weeks.  Maximum cold hardiness usually occurs by mid-winter.  Plants also gradually come out of dormancy.

The changes that allow plants to come out of dormancy are triggered by the amount of time the plant is exposed to cold temperatures which is known as the plants chilling requirement.  A plant that is in a true dormant state will not grow if adequate chilling has not occurred.  This is true even if the plant brought into warm, favorable conditions.

Like many other fruit crops, aronia plants develop immature flower buds in late summer or fall during the year before they flower.  Before aronia flower buds open in the following spring, the plant and its flower buds must be exposed to a period of cold weather or winter rest.  This is known as the chilling requirement and it naturally occurs as a consequence of cold winter weather.

Most woody deciduous plants that have evolved in cold climates have a chilling requirement.  This includes fruit trees like apples, peaches, etc., as well as small fruits such as elderberries, blueberries, grapes, strawberries, etc.  For aronia, the actual chill requirements have not been determined by research studies.  My best guess based on where I have observed ‘Viking’ aronia being grown in the United States is that it probably requires somewhere between 800 and 1,000 chilling hours.


The chilling requirement of a plant is often expressed in chill hours.  Deciduous plants need a minimum number of “chilling hours”  or chilling units (CU) in order to break out of dormancy and produce new leaves and flowers in the spring.  This is the amount of chill needed to satisfy a deciduous plant’s dormant or rest requirement, plus the amount of heat required before flower buds and leaf buds will break and begin to grow in the spring.  Most deciduous plants need a specific number of hours within a certain cold temperature range to satisfy their chilling hour requirement.

In other words, chilling hours are the number of hours below a certain temperature that are accumulated by a plant during the winter to overcome dormancy.  The amount of chill needed to satisfy a plants dormant rest requirement, plus the amount of heat required to initiate growth, determines how long flower and leaf buds will remain dormant.  In general, the lower the chill requirement, the earlier a plant will bloom.

Deciduous plants that do not receive the proper amount of chilling hours during the winter will usually leaf out erratically, later than normal, or not at all.  They may also have problems flowering and forming fruit.

There are several models that have been developed to estimate the chilling requirements of deciduous plants.  These models are used to calculate accumulated chill and estimate chilling requirements.  The two simplest models that are most often used are the 45 and under model and the 32-45 model.  The complexity increases with the more recently developed models.  In these models, hours of chilling received are expressed as “chill units.”  Even though accuracy may increase with complexity, the nature of the calculations and record keeping is daunting.

The 45 and under model is the earliest and most simple model and is still in use.  Simply put, every hour below 45°F (degrees Fahrenheit) equals one chill hour received.  No magic here, but it does not define when one starts to record chill in the fall, or when it doesn’t matter anymore in the spring.

The 32-45 model is a bit more definite about the cold but much more complicated about when chilling is accumulated.  This model says any hour of cold between 32 and 45°F. contributes one hour to satisfying a plant’s chilling requirement.  According to the 32-45 model, temperatures below 32°F don’t contribute to accumulated chill.  The chill hour map for the 32-45 model developed as a result of research done at the can be used to estimate the chill hours for your area. 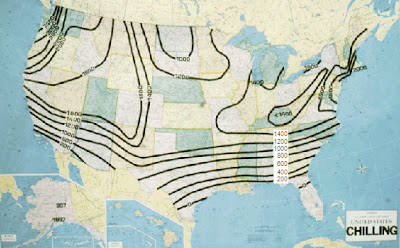 In 2009 and 2008, I consulted on a test planting of 200 ‘Viking’ aronia plants that were planted in south-central near the border on a cooperator's fruit farm.  Liners that were about six to eight inches tall were planted in the spring of 2008.  By mid-summer of that year, the plants had grow to about three feet in height.  The plants were healthy, vigorous, and pest free.

As a trial, I recommended that half of the plants should be sprayed with Dormex (hydrogen cyanamide) at the rate recommended for peach trees.  Dormex is a plant growth regulator that will stimulate more uniform budbreak on many deciduous plants.  The Dormex label lists several deciduous fruit crops including apples, blueberries, cherries, grapes, kiwee, and peaches but not aronia.  (This was a test planting and the fruit were not going to be eaten.)  When used on labeled plants, Dormex will cause a more uniform bud break if the plants have received their full or somewhat less than their full chill hour requirement.  Promoting more uniform bud break in the spring can have significant benefit in promoting more uniform flowering and more uniform maturity at harvest.

This test planting seems to indicate that ‘Viking’ aronia plants probably need at least 800 chilling hours.  The plants do not get enough chilling hours when planted south of the northern part of USDA Hardiness Zone 7.  When planted further south than Zone 7, Aronia melanocarpa and its cultivars will probably not get enough chilling hours to satisfy their need for a cold, long winter.  However, there may be some differences in the chill hour requirements of other cultivars of Aronia melanocarpa.  Further testing is needed.

If you have experience growing any of the cultivars of Aronia melanocarpa in southern areas, please post a comment in the box below.  To learn more about aronia, visit our website Everhart Horticulture Consulting.

Please use Chrome or Safаri (not IE) to view this blog

For more information about aronia, visit our website by clicking on the photo above.

Viking aronia plants for sale (click on photo below)

My Most Popular Posts

Are you an Aronia Berry Fan? 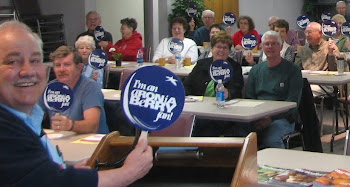 This blog is published by Everhart Horticulture Consulting